There is no sufficient evidence that can prove that this stimulant drug used to treat Attention Deficit Hyperactivity Disorder (ADHD) and narcolepsy, causes hair loss. However, experts continue to share that this uncommon side effect is likely to occur especially among patients who take the drug in high doses or those who have been using it long-term.

Although it cannot be explained clearly as to how the drug contributes to the thinning of hair or even extremely shedding them, the development of stress factors due to the usual side effects of the drug is seen as a reason. The condition of hair loss can occur in any age group – even among children.

A Link Between Adderall and Hair Loss 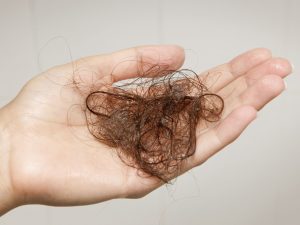 It is difficult to tell how long hair loss can occur while under the treatment of the stimulant. There are no clinical studies available that can determine if the condition can be permanent. However, there are few anecdotes taken among patients which significantly show that the drug can be linked to hair loss.

Alopecia, a disorder of losing hair, can occur especially when a person is experiencing a lot of stress. However, apart from stress, multiple other factors cause it such as heredity, aging, illness, hormonal changes, and even the type of hair care a person has. Some people experience hair loss in a few amounts while others experience a lot.

Manufacturers of the drug indicated its potential hair loss impact although there is no particular indication as to how the substances contained in it have caused it. Certain medications affect hair loss and in the case of stimulants, their tendency to affect the immune system could be blamed.

Hair loss is a result of the immune system attacking the hair follicles. As long as the hair follicles are not damaged, the hair will still eventually regrow. Since the drug contributes to a decrease in appetite, weight loss is likely to occur which makes patients more susceptible to nutritional deficiencies leading to hair loss.

According to a case study in 2018, Ritalin, a stimulant used to treat ADHD, is seen to have contributed to the hair loss of a 12-year old child since as soon as the drug was removed from the child’s treatment and was replaced with an alternative drug, hair growth was imminently observed.

In a different case in 2013, another 12-year old child who was taking it developed trichotillomania. It is a disorder where a person resorts to pulling their hair from their scalp and other parts of the body to cope with their anxiety or overstimulation, behaviors which usually happen when one is taking the drug.

Despite these conditions, there have been no cases reported that the drug damages the hair follicles, therefore; the chances of regrowing one’s hair are high especially when one opts to take an alternative drug or with the physician’s approval, the dosage is adjusted to a lower level. If hair loss is concerning, it is best to talk it out with one’s physician.

How It Potentially Causes Hair Loss

The side effects caused by taking the drug could also be the culprit as to why hair loss occurs. As the levels of norepinephrine are increased in the body, the natural fight and flight response of a person to any stressor is activated, and might have trouble deactivating again. This brings about episodes of anxiety and despair which add up to individual stress.

This condition can also be brought on by overstimulation. The drug is intended to manage compulsive behavior and increase concentration among patients with ADHD. Once misused by individuals without medical ailments, overstimulation may occur. Students who opt to use the drug to keep themselves on the task at school are highly at risk.

With the drug’s addictive factor, people who use it to experience high may also experience overstimulation. As soon as the drug wears off in the system, they could suffer from mood disorders. All these stressors are capable of bringing about hair loss and even the act of compulsively pulling out one’s hair to cope with stress.

As a treatment for narcolepsy, a sleeping disorder that prevents an individual from staying awake, the drug activates neurotransmitters that keep a person awake and be filled with energy. This function may affect sleeping patterns and make a person even more restless. With a consistent lack of sleep, the body may suffer from hair loss.

Some people misuse the drug to lose weight. Patients tend to lose their appetite and burn their calories faster than usual. When this happens among children with ADHD, their growth is oftentimes compromised. When the body experiences an inadequate lack of nutrition due to loss of appetite, this can lead to hair loss.

There are also instances when a person experiences allergic reactions to the drug. This is one of the severe side effects of the drug which requires immediate medical attention. Part of this allergic reaction is the constant itching of any parts of the body including the scalp. Scratching one’s scalp excessively can lead to hair loss

The amount of hair that a person can potentially lose varies among individuals. If hair fall is extremely alarming as it results in getting bald or it affects one’s self-esteem most particularly among children, it is best to seek advice from one’s physician. This rare side effect of the treatment can be intervened by different options.

Since stress is the most common factor which contributes to hair loss, it would be best to keep one’s body and mind in a good shape by getting enough rest, exercising, and keeping a healthy diet. Boosting up one’s immune system with supplements can also be helpful. However, consult one’s physician first before taking anything to avoid drug interactions.

Some experts recommend seeing a trichologist in case one develops trichotillomania or a therapist to treat coexisting mood disorders with ADHD. By addressing issues with these disorders, hair loss can be controlled. If the concern becomes overwhelming, one may discuss taking an alternative treatment with a physician.